Do you dread calling those corporate 1-800 numbers to get answers to questions related to products / services? Do you hate having to provide the same personal info again despite having done so in response to the (forever long-winded) automatic answering system?

While it is still comforting to talk to a living and breathing person, my experience in the last two months communicating with two companies has altered my expectation of customer service. END_OF_DOCUMENT_TOKEN_TO_BE_REPLACED

I came home after a productive start to a work week and was greeted by ten familiar faces congregating in the living room discussing plans for Easter. An empty space on a couch beckoned and shortly, I found myself in the thick of the conversations.

It’s a common occurrence in this household – the gathering of people and the occasional coming-and-going of a few throughout the week. As the group dwindled down to four, each of us started turning our attention to our mobile devices of all shapes and models.

END_OF_DOCUMENT_TOKEN_TO_BE_REPLACED

In an earlier blog titled “Truth About Memories and Selfies”, I reflected on how I often allow technologies (specifically cell phone, digital photography, the Internet, social media, etc.) to rob me of truly experiencing my surrounding and the people I am with. I had a chance to put my trigger-finger and self-control to the test when I had three other friends go on a company-sponsored cruise with me on the Norwegian Jewel. 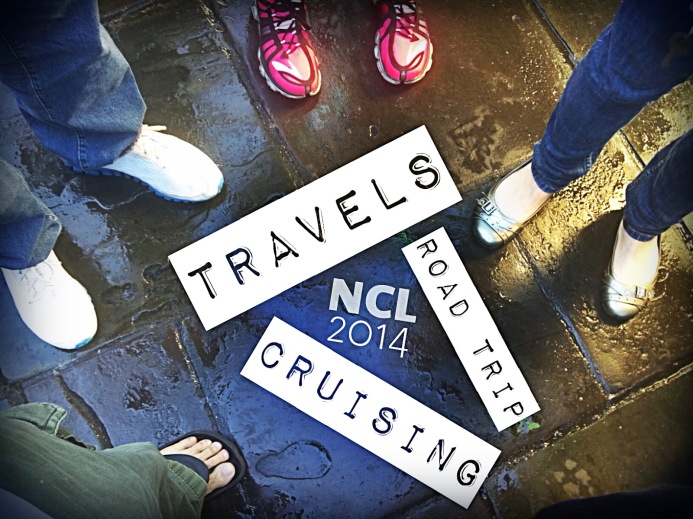 Road Trip Beckons
Before we can board the 93,500+ ton vessel to embark on our 7-day journey to four destinations in the western Caribbean, we had to get ourselves to New Orleans or better known as NOLA. That calls for a good old road trip; one of my favorite means of travel unless I go solo and take to the skies.

Armed with extra batteries and charging cable (along with “island” wear, running gear, and tanning lotion), I was ready to capture the experience with my trusty Motorola Photon. I was also determined to simply take the photos and not worry about uploading the pictures and/or creating montages (ie. multiple photos arranged in a variety of grids).

Unplugging for 7 Days
Sailing between the Gulf of Mexico and Caribbean Sea, and being 680-to-960 miles away from U.S. soil, I was glad to disconnect from the world-wide-web. I am also proud to say that no online social interaction took place when we first got to NOLA after an eleven-hour drive through the night from Oklahoma City.

We explored the sleepy French Quarters just as the sun bathed the streets in gold. We avoided the crowd and long lines at Cafe Du Monde (gasp!) and enjoyed several famous (and equally delicious) beignets in another nearby cafe. Before long, the city came alive with tourists, street artists, and horse-drawn carriages as we got ready for our week long escape from work, school, and kids.

348 Images … Countless Memories
I am not going to bore you by recounting details of the vacation and instead, return to the point I was making earlier about not allowing technology to distract me from truly enjoying the sights and sounds.

Between New Orleans (U.S.), Cozumel (Mexico), Belize City (Belize), Roatan (Honduras), Costa Maya (Mexico), and onboard the cruise ship, over 340 images and a handful of videos were captured. I have resisted the urge to create photo montages during the vacation and only started doing so during the drive back to Oklahoma City. The montage on the left is one such example.

Albums Galore
Facebook has long been my media of choice for storing digital photos taken of hiking/camping trips, running events, restaurants/food, vacations, holidays, and wear pattern of running shoes (yes, that’s a nerdy side of my running self).

There are multiple albums for different sets of photos, some of which I kept private while others, I added people as contributors.

Insta-glam!
I was using Instagram as another media to showcase more stylistic images; ones that were “manipulated” from the original photo. It’s harder for me to paint a picture with a 140-word tweet, whereas Instagram allows me to tell a better story with a picture framed within a square.

In addition, Instagram has introduced a whole new community of visual artists from all over the world as I paired my glamor-shots with specific hashtags.

Recently, I started archiving photos (ie. mostly the “raw” pictures) in my Google+ account. It has an interesting function called Auto Awesome, which creates a new version of photos and video you upload onto Photo.

After uploading the photos from the recent vacation, I was pleasantly surprised by some of the auto-awesomeness of my compositions.

For example, I shot a series of images as we drove into NOLA through a curtain of fog glowing against the rising sun. Google+ automatically stitched these images together and created an animated gif seen on the left.

Upon arriving at Roatan, I took three overlapping photos between the cruise ship and the lush green hills with the intent to stitch them in Photoshop. Google+ beat me to it and automatically stitched these images side-by-side to create a panoramic image seen below.

There are several other Auto Awesome effects but the photos have to match specific criteria for Google+ to create these (surprisingly fascinating) images. I can’t wait for the day when Google+ allows users to manually select images and apply some of these effects.

Meanwhile, between five destinations and four friends, I can say we enjoyed our Caribbean adventure. I was not too distracted by picture-taking and now, different people can catch a glimpse of our memories in the virtual realities of their choice.